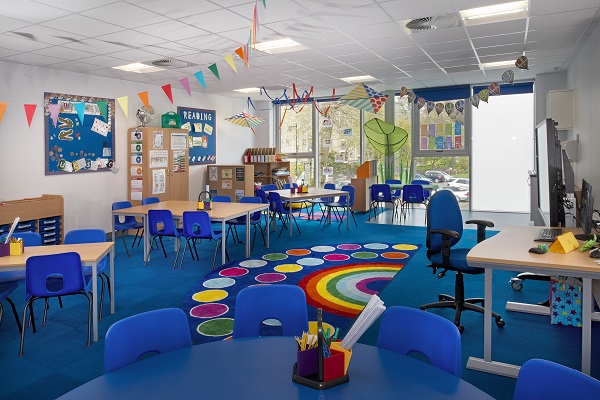 This year Munro have been involved in a multitude of education sector projects, but one which has stuck out as particularly pleasing for our Chelmsford, Essex branch is Whitehall Park School in Islington, North London. A new build project which is the new home for local primary school students and their teachers.

Since setting up in 2014 the school has faced several challenges, primarily resulting from the fact that the school had been in five temporary sites during its very short life and during the infancy of establishing itself as a new school.

With a tight proposed programme, Munro undertook the challenge to provide the school building with the services they finally deserved. Working with Extraspace Solutions as the main contractor the first solution was to make the process as quick as possible. Prefabricated classroom shells, consisting of the floor and steelwork, arrived at the new site. With Extraspace Solution’s expertise in modular building, this sped up the initial construction process which allowed the teaching staff to set themselves up in the new school in readiness for the new term.

Installing M&E in the sports and assembly hall was a particularly rewarding aspect of the project as the school in its current guise had not had one before.

In our experience in this sector, halls are a communal area which becomes the beating heart of the school. The area they all share, where previously unfamiliar faces become recognisable, where they sing songs together and eat lunches in each other’s company.

It isn’t just the hall that will be a new experience for these students, they now have more outdoor play areas than ever before. Their new permanent school is built with a playground as well as outdoor learning areas accessed through their classrooms. A further playground on the roof has spectacular central London views, with trees in the grounds and sculptures that build an exciting environment to inspire creativity and learning.

You can read a more detailed account of the Mechanical and Electrical services Munro installed in the Whitehall Park School case study under the Education section of our website.

The school was an important project for all involved, even with volunteers and PTA members coming in during their own time to assemble the flat pack furniture. Eventually, the grand opening of the school was on March 25th 2017 – a surprise for all the children.

Since then, the school has achieved an overall rating of “Good” in its first ever Ofsted inspection which commented on how the “Pupils at Whitehall Park are very happy and extremely proud to attend this school.”

At Munro Building Services, we are glad this school is being received so positively by the educational authorities and local community and we are equally proud to have been a part of this school’s early steps into changing young people’s lives.